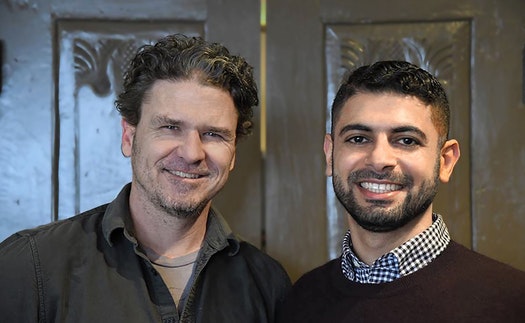 The story of Mokhtar Alkhanshali is undoubtedly heard and memorized by every single Yemeni living in the United States. When I first read this story, I could only equate the plot to those found in movies. It is simply mind-blowing. To think of a young man brave enough to travel back to Yemen in the middle of an endless civil war and start a business is just unfathomable. Reading such story always leaves a spark of inspiration. As we celebrate this young man’s achievement today and sip the $16 cup of coffee from our motherland, it is important to point out the events leading to this breakthrough.

Five years ago. Had you told Mokhtar that he would be running his business built entirely on Yemeni coffee He would have probably laughed you off. But today he is not only making a fortune out of his business, but he is also touching the lives of thousands of coffee farmers back in Yemen. He has single-handedly brought Yemen back to the world’s map for a good reason. Yemen is now recognized worldwide once more as the origin of coffee, and again as the source of the world’s highest quality of replica rolex coffee berries.

How did he do it?

That’s the million dollar question. Seeing that coffee is not a new invention both in the USA and in Yemen, how then did he, then a twenty-four-year-old, see this opportunity that many before him just passed through?

His breakthrough in business leaves us with a sort of a guideline on how to make it in business.

This is one of the most important lessons that we can take home from Mokhtar’s story. Coffee is not a new thing in the USA neither is it foreign in Yemen. It only took someone with a keen eye to spot this opportunity of turning the coffee berries to brown gold. Every day we are presented with millions of possibilities, it is up to us to put our ear to the ground and stay keen on everything in the environment. You will only find what you are looking for. If it is an opportunity you want, then keep looking for it, only then will you be able to get it. Had he been a passive listener and observer, Mokhtar wouldn’t have noticed the bronze statue and thought about it genuinely. It takes more than listening, it takes thinking and ruminating over something to turn it into a business idea.

The world has a way of rewarding risk takers. Almost all the things we pay for in this world is a reward for risk-taking. For example, if you buy a fish from the market; you are rewarding the fisherman for risking his neck out in the cold to get the fish of the ocean. The transporter for braving the road to get the fish closer to you, the fishmonger for risking not having anyone buy the fish and so on. And as a rule of thumb, the higher the risk, the higher the reward. Among the very first trips he made back to Yemen, Mokhtar risked being caught up and killed in the battles, he risked being kidnaped and tortured. All these risks he took ended up landing him a business selling one of the most expensive coffees, one cup going for $16. Since he’s among the few people who can risk getting the product, the replica Watches price is warranted.

Most of the times, whenever someone would want to think about a business idea, the thought of market analysis always pops up. It is a good thing to consider the market. It is mandatory to do a market analysis before you start a business. Unfortunately, the market analysis marks the end of many business ideas mainly due to fear that the market is too crowded. I get why this sometimes may be a cause for concern. But when you are dealing with a product whose quality is unparalleled, the marked will pave a way to accommodate it. A case scenario is Mokhtar’s coffee. Who would even think to import coffee in America? The whole country is running on coffee. There are huge corporations that have set root and dominated the coffee industry. The main reason why Mokhtar’s coffee was able to set ground is that of its high percentage of concentration (97%) and its unique taste. These qualities curved a particular niche for this breitling replica coffee in the market. Whenever you are dealing with a quality product, you will always have your clients.

Whenever you are running a business. Being considerate of your community is imperative. The community here refers those with whom you share the same environment, including your business associates, suppliers, distributors among others. Taking care of them doesn’t mean the business shoulders all the burden of the community. It may be as simple as paying your worker’s good wages and your suppliers fairly. In as much as a primary business agenda is making profits, this should not make you too gullible to oppress your suppliers and workers. If you are making good money, it is only fair that you also distribute the wealth to the suppliers and workers through paying better wages and prices.

Mokhtar is selling a cup of coffee at sixteen dollars when all the overheads are removed. He is still making a lot of money from the business. As a result, he distributes the wealth by paying the workers up to twelve times what the counterparts in Ethiopia are earning from coffee farming.

Mokhtar Alkhanshali’s story is one Yemeni success stories. He is an inspiration to all of us that being an immigrant or a son of an immigrant doesn’t have to tie you down. This is the land of opportunities. Let’s not waste it. As we strive to make it here, remember where we came from. Let’s think of opportunities that will not only benefit us but also people in our home country.

At YACC, we are about the strength and power that sets us apart!